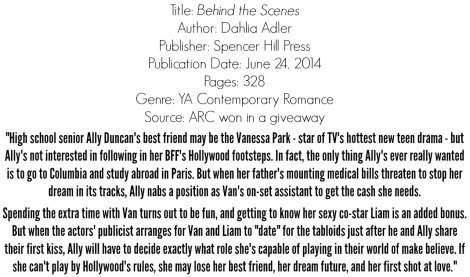 This was such a cute story! Normally I stay as far away as possible from fluffy YA contemporaries, but lately I’ve been trying to get out of my comfort zone and attempt to read more books like that. Behind the Scenes is the fifth or sixth book in this genre that I’ve read over the past few months, and I have to say that it didn’t disappoint.

The first thing that I noticed is how similar the plot is to Open Road Summer by Emery Lord. There’s a celebrity, a “normal” girl, a teen heartthrob, and fake dating all going on in both books. But once I got beyond how much they seem the same on paper, I started to realize how much of a different story it was. The biggest difference between the two is that Behind the Scenes has a main character with a totally different personality.

I strongly related to and liked Ally’s character. She’s very similar to how I was in high school, with her quiet bookishness and constant struggling with self-confidence. So I immediately had a really big soft spot for her in my heart. I just wanted to wrap her up into a hug and tell her that everything was going to be okay. But as the book went on, I had a hard time continuing those feelings. She became jealous, hurtful, spiteful, and thoughtless, turning into somebody that I really didn’t enjoy reading about. Ultimately she is punished for those actions and begins to realize how awfully she’s acted, so I liked that she goes through a lot of character growth, but it was so hard to fully love this book when I couldn’t stop wanting to slap the main character in the face and tell her to stop being so stupid. I’ll admit that I think Ally is actually portrayed very realistically, because I think that a lot of teenage girls have trouble with stuff like doubt and resentment, but it was really hard to watch her self-destruct and basically ruin everything because she just couldn’t make herself trust her relationships with people. So, even though it was realistic, it wasn’t always a fun thing to read about, unfortunately.

I did really enjoy the romance between Ally and Liam when they were together, though. They had such a strong connection and I adored his personality. I thought that Liam was surprisingly multi-layered and I really enjoyed getting to know him throughout the story. I also loved Vanessa’s character. Her relationship with Ally was so refreshing…I love books that have strong female friendships. But it was hard for me not to compare them to Dee and Reagan’s in Open Road Summer, since the two books are so similar in a lot of ways, and honestly I liked that friendship more.

I also really didn’t like how the book ended. I thought that how things with Ally, Liam, and Van wrapped up was nice and sweet, but I wish that the problems with Ally’s family life had ended a little differently. I’m not going to go into detail with that, because I really don’t want to spoil it, but let’s just say that it wasn’t my type of ending. Parts of it were unrealistic and didn’t seem to mesh with the tone from earlier parts of the book.

Overall, this book was well-written and a cute, quick read that had a bunch of things I enjoyed, but Ally’s overbearing jealousy and my mixed feelings about the ending made me not love it as much as I wanted to. I’m surprised that I liked it even this much, though, considering my rocky history with this genre…so I think my rating really says something about how good of a story Adler has created here, and I have a great feeling about her future books!

One response to “Behind the Scenes by Dahlia Adler {Book Review}”

EMAIL ME ABOUT YOUR CURRENT YA GIVEAWAY AND I WILL INCLUDE IT IN THE GIVEAWAY ROUND-UP SECTION OF MY WEEKLY WRAP-UP POSTS! tempestbooksblog [at] gmail [dot] com

Nothing, at the moment.

"There is no ordinary life for people like you and me.

My life would be allegiance instead of love, fealty instead of friendship. I would weigh each decision, consider every action, trust no one. It would be a life observed from a distance.”